Assistance for women victims of human trafficking and prostitution

A Valentine’s day with solidarity and charity

Due to influence of consumerist culture over the years, the celebration of Valentine’s Day has become an increasingly meaningless moment where, as with other celebrations of all kinds, what prevails are shopping and gifts, often without much of a message. But the celebration itself does have a committed, solidary and even revolutionary origin, we could say.

In fact, it dates back to the third century in Rome, where a priest named Valentine opposed the order of the emperor Claudius II, who had banned the celebration of marriages for young people, because he thought that bachelors without family were better soldiers, as they had fewer ties and sentimental bonds.

But Valentine, opposed to the emperor’s decree, began to secretly celebrate marriages for young lovers. A decision that caused Claudius II to sentence him to death on February 14th, year 270, alleging disobedience and rebellion.

At Amar Dragoste we also fight against injustices such as those affecting victims of trafficking and prostitution. Therefore, we ask for your collaboration and we do so on this occasion by asking for your support through purchases that do have a message, that do have a meaning, a purpose, that show commitment, such as those you can make in our solidarity store, where you can buy jewelry made by women victims of human trafficking in the workshops we organize for them.

A purchase whose benefits will go precisely to improve their situation, since all the proceeds from the sale of jewelry is a full and direct income for women in their first stage of the recovery process when they still do not have a job.

In addition, you can also make donations that help to maintain the projects we have with them such as Casa Refugio, the mobile unit, psychological assistance, among others.

Visit our charity shop and make this Valentine’s Day a moment of solidarity and commitment. 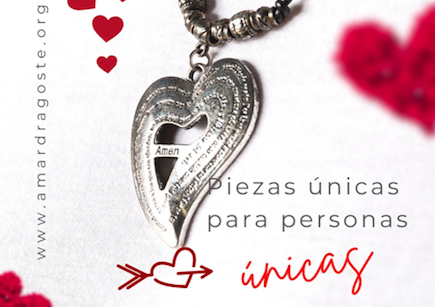 If you want to receive news from us, follow Amar Dragoste’s work or find out about ways to collaborate, sign up with your email address.

This website uses cookies to improve your experience while you navigate through the website. Out of these, the cookies that are categorized as necessary are stored on your browser as they are essential for the working of basic functionalities of the website. We also use third-party cookies that help us analyze and understand how you use this website. These cookies will be stored in your browser only with your consent. You also have the option to opt-out of these cookies. But opting out of some of these cookies may affect your browsing experience.
Necessary Always Enabled
Necessary cookies are absolutely essential for the website to function properly. These cookies ensure basic functionalities and security features of the website, anonymously.
SAVE & ACCEPT

This site is registered on wpml.org as a development site.
Go to Top